Ice-skating is not an activity I've ever been able to master. I've only tried it a couple of times but don't have the balance nor the ability to control both legs at once (apparently). I never did figure out how to stop my legs going their separate ways, resulting in some pretty spectacular splits, which I generally can't do either! 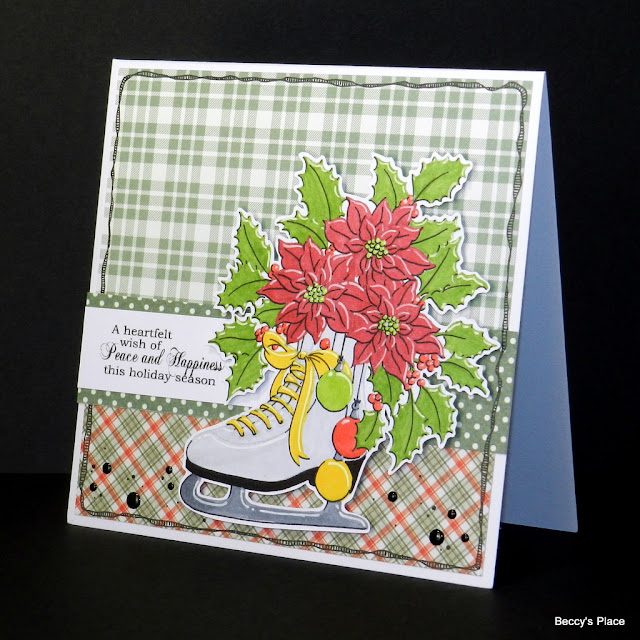 YOUR TURN: Create a card or papercraft project using the letter "I" as your prompt.
Click the link below to add a photo of your creation to the challenge:
CLICK HERE 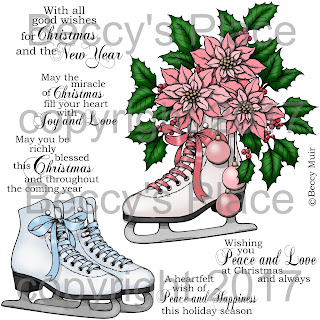 Such a pretty card. I have never tried ice skating. I can't even walk on a flat even surface without tripping over nothing so I am definitely not putting blades on my feet and trying to walk or skate. I will most likely end up in the Emergency Room. Not a good idea.

ROFL - Oh I hear ya on that skating adventure - when I was younger I could skate and skate and skate - not anymore - tried several years ago to ice skate and roller skate - decided I needed to STOP before I broke something - I do have fond memories however, and now I shall upload my ice skating card! Your skating card is beautiful! Love the digital - which I need to use in a future card! TFS

Even if you can't ice skate, your ice skate card is magnificent, Beccy! When I was a child of perhaps 10, I found my Grammy's old, girlhood ice skates in a trunk in the attic. I tried them on and they were a perfect fit. Since I lived in an area where it doesn't snow, all I could do was clump around the attic, balancing on the blades (and doing that quite well.) That next winter, I begged to be taken to an ice rink in the mountains closest to our home (at least an hour's drive away) so that I could show everyone how easy it was to ice skate. All I can say is that I learned there is a huge difference between clumping on a wooden attic floor and trying to keep one's feet beneath one when on the slippery ice! I never even bothered to try the skates on again. :-D

I never attempted ice-skating - had enough issues with roller skating to put me off trying. Lovely card Beccy. Love the yellow laces and bauble.

Super cute colors on this card! I love the addition of yellow. I remember getting ice skates as a child and skating only once. I used to love to roller skate though. Does anyone else have memories of going to a roller rink on Saturday? It was the best place to hold hands with your crush ;)

I have never tried figure skating, but my eldest sister took me to buy my first pair of (Nordic) skates (featuring red leather bands) when I was 4 years old. When I was 16, my parents allowed me to buy a pair of speed skates, which I have cherished until I relocated from the Netherlands to Crete in 2008. I passed them on to a young boy who was going skating with his grandfather. It made me feel good that they had gone to a good home.
Marianne x

Yess skating is really an art. Once I was going to loose my hand as I fell down and couldn't stand up. But is fun.
Lovely card Beccy.

Great card and skates. Now I only watch ice skating. I used to be young and ice skating, now I'm afraid of falling over. I envy others. However, I hope to try again sometime.

I went Ice skating once and could not keep up at all. I was using a little penguin but got told off as it is only for little children (spoilsports!)

This is a beautiful card. The 2 different checks I would not have thought to put together but it works really well.

Gorgeous card! Love your ice skate! I have never tried ice skating and never had the urge to do it.
Have a great day!
Marilyn❤️

Oh man---memories! I loved ice skating when I was younger. Sometimes we would have a fire by our pond and skate at night---LOL--singing at the top of our lungs! I remember singing "Knock 3 times on the ceiling if you want me!" Another time, ice had formed on top of the snow and you could skate all over---just hoping you didn't break through. My Dad even skated that day out to what we called our hill---literally just a hill! Now, I ice skate very seldom, but when I do it is at an indoor rink. Not the same, but fun all the same!
Great card!

Only once I tried but I fell. I did not go on and I regret this!
Very optimistic card! It's fabulous to put the flowers in such a... vase!
All the best, Beccy!

Stunning card, ice skating was one of the only sports, outdoor activities I could enjoy, many falls along the way, I will admit, hugs, Lori m

Must be over 35 years that I've put on some iceskates. But it must have looked clumsy and scary all the way! LOL! No I was no fan from ice skating. Your iceskate looks so beautiful on your card, and yes a boucquet of flowers fit better in the iceskate then my feet ! Hihi ! Creative regards, Gina

It must be over 35 years that I've put on some ice skates. And it must have looked clumsy and scary all the way ! LOL ! No I was no fan of iceskating. The iceskate on your card looks so beautiful with the bright yellow ribbon. And yes, flowers fit better in the iceskate then my feet ! Creative regards, Gina