Flowing, translucent fins and shimmering scales are the iconic features of fantail goldfish, and today I'd like to share a colouring technique for achieving that look. 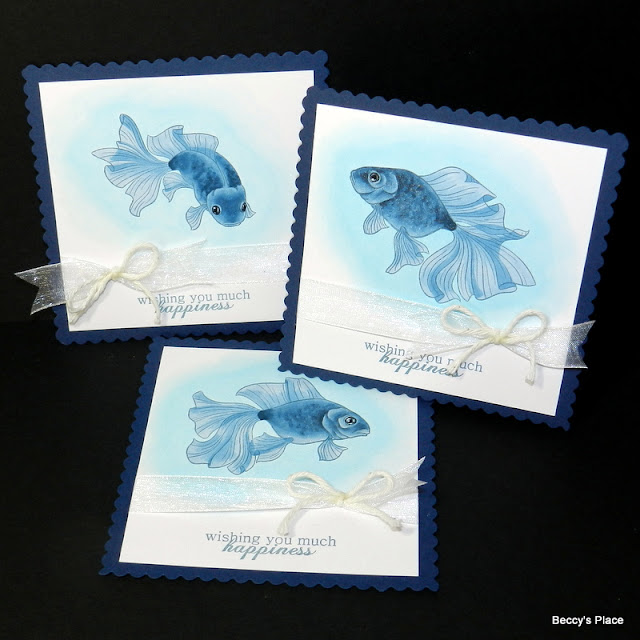 I started by stamping one of the images in blue, water-based ink on a piece of blending card. The water-based ink doesn't react with the alcohol markers, so smearing and smudging shouldn't be an issue. 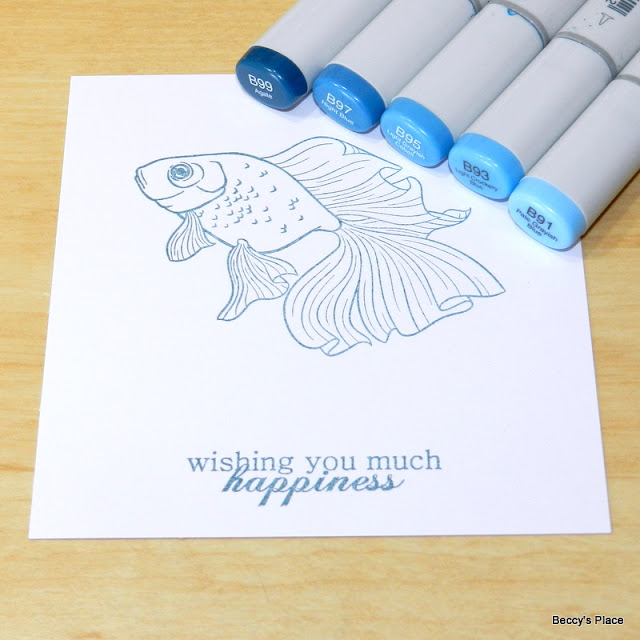 Colour the entire image with the B91 marker. 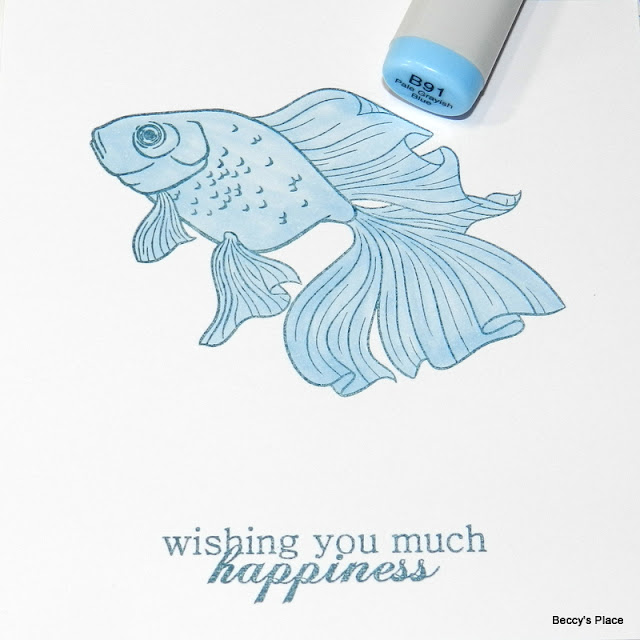 Use the B93 marker to darken the fins where they meet the body of the fish. Flick the strokes outward from the fish's body toward the edges of the fins. 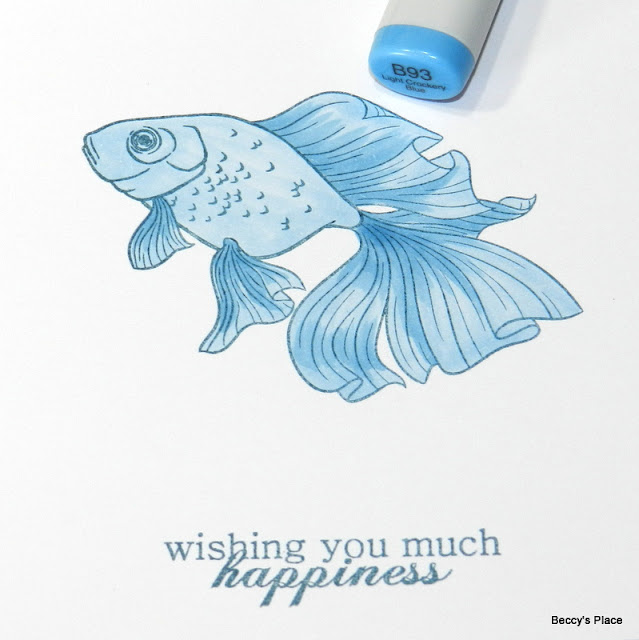 Blend the colours together by adding another layer of B91 marker over the top of the B93. Don't overwork the colour or you'll end up with a mottled look. If you want to work further on an area, come back to it after it's had a chance to dry. 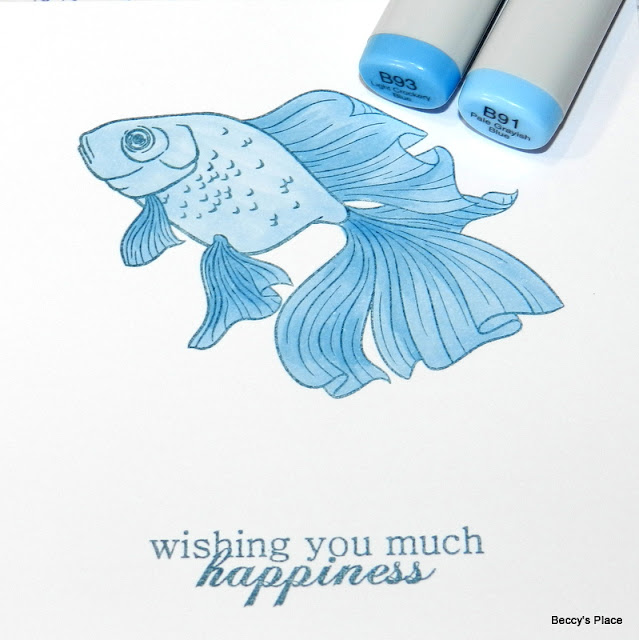 To give the illusion of translucency, use the B93 marker to darken the parts of the fin that pass in front of the body, such as the pelvic fin. You want to follow the shape of the body to give the impression that it can been seen through the fin. 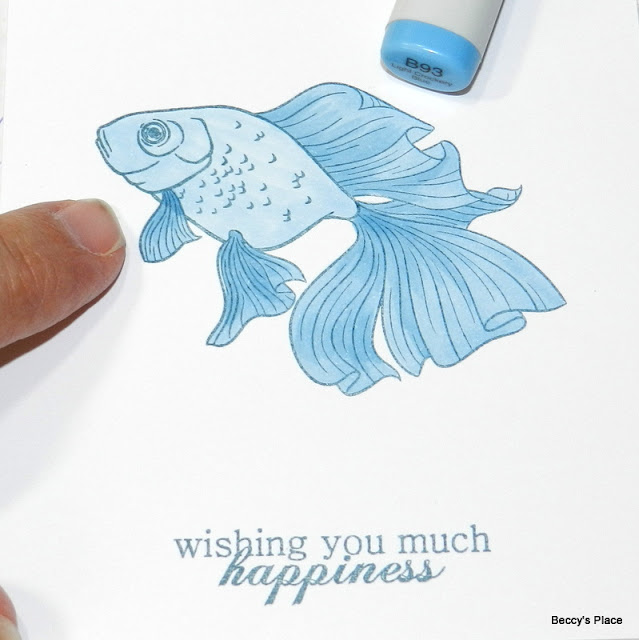 Do the same thing where the fins pass in front of each other, such as the curls on the dorsal fin. Use the marker to describe the shape of each fin as it disappears behind the others. You can make a very light guide line with a pencil first if you'd prefer. 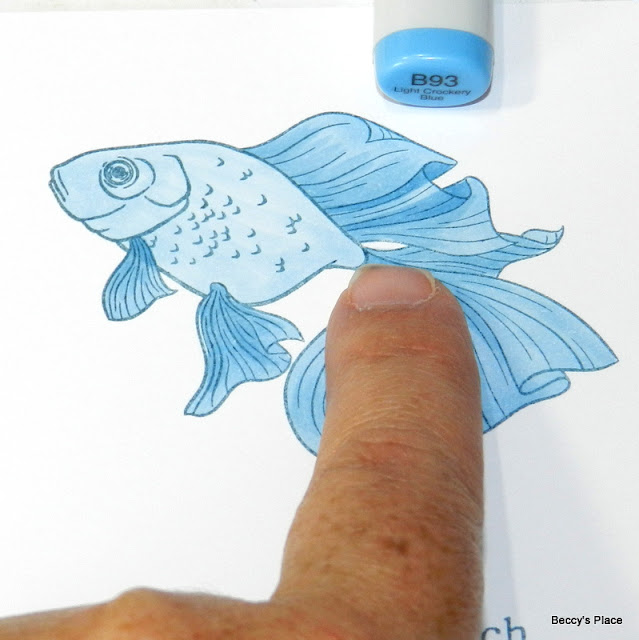 Use the B93 marker to darken all the areas where the fins and tail pass in front of another part of the fish. Allow to dry for a few minutes, and then add another layer in the same areas. 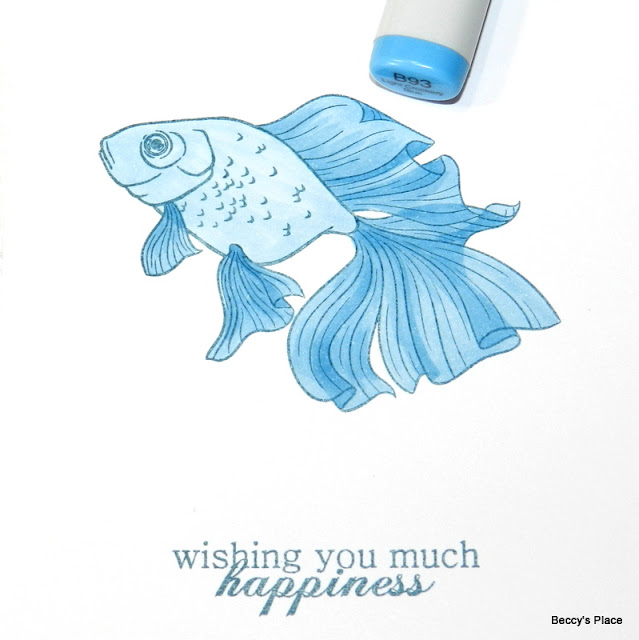 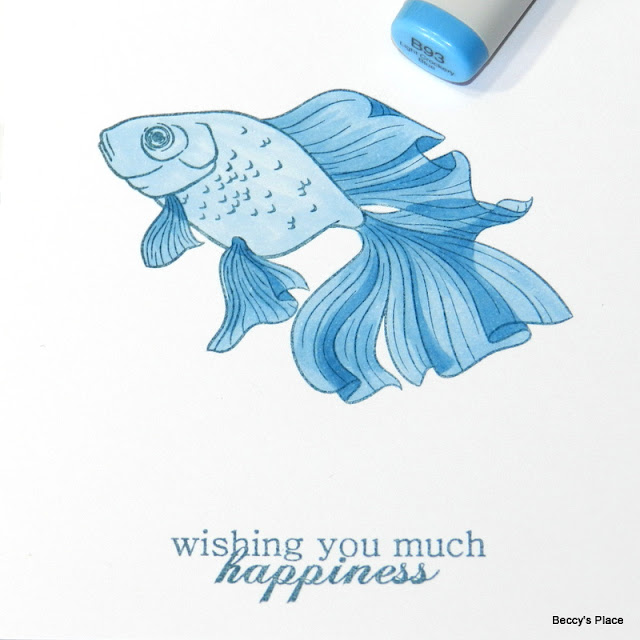 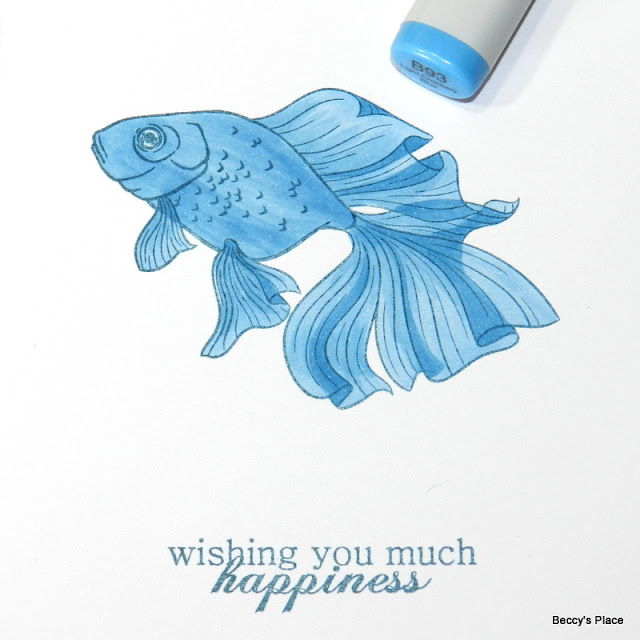 Use the B95 marker to darken the body, avoiding the belly, chin and edges of the gills. Start to give some texture to the scales by colouring little circular areas around the belly. 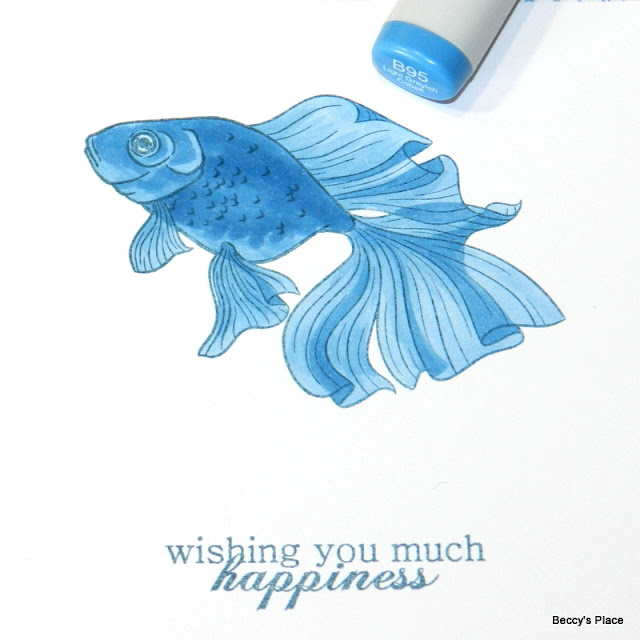 Continue to darken the body with the B97 marker. Apply the darker colour over the B95, making sure that some of the light colour is still visible. There should be three distinct colour areas visible on the body of your fish, with an obvious light, mid and dark range. Use the tip of the marker to describe the shape of the scales with a little more detail. 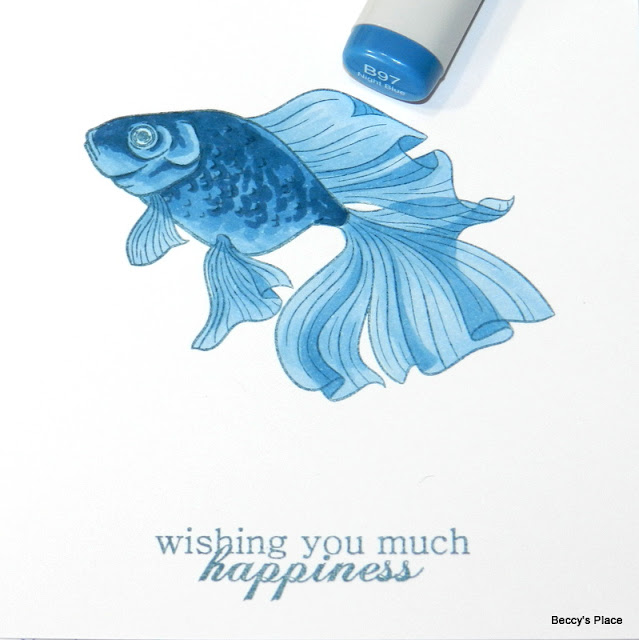 Use the B99 sparingly. A little around the end of the body, under the gills and scales and in front of the eye should be enough. 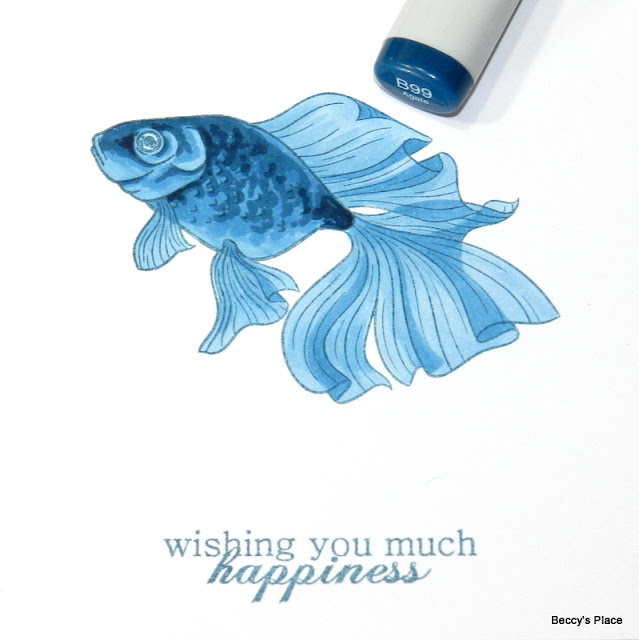 Now you're going to work all the way back down through the colours again, starting with the B97. Colour over the top of the B99 but not quite all the way to the B95. You want to blend the colours a little, but not so that you lose all the texture you've added to the scales.
Use the B95 next, colouring over the top of the B97 and almost to the B93. Work your way down the markers blending the colour that's one step darker. 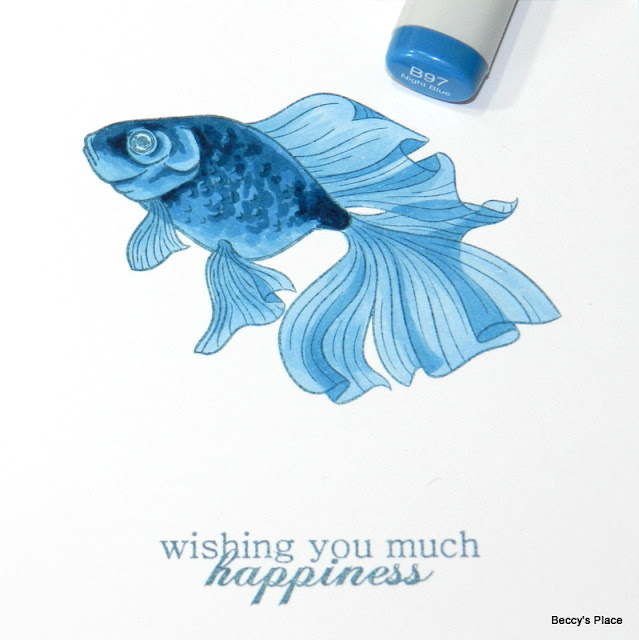 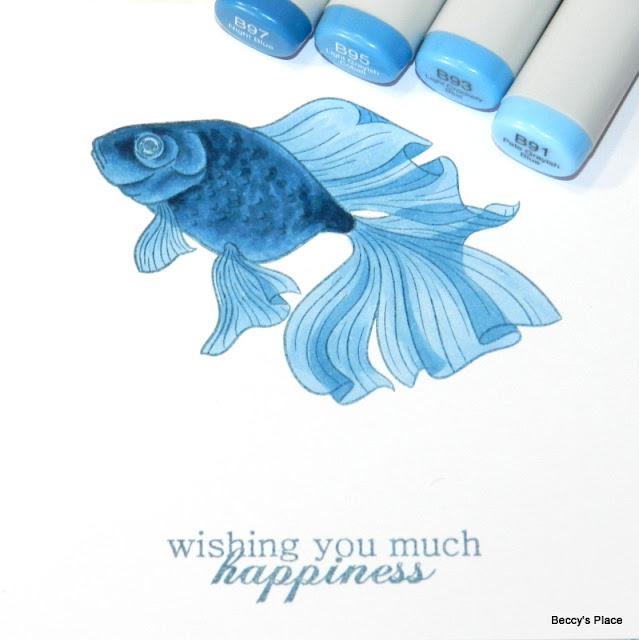 The final task is working on the eye, which usually forms the focal point of any image. I've used a black pen to colour the pupil and add a little shadow around the edges. A dot of white brings life to the eyes. (CLICK HERE for a tutorial on colouring eyes) 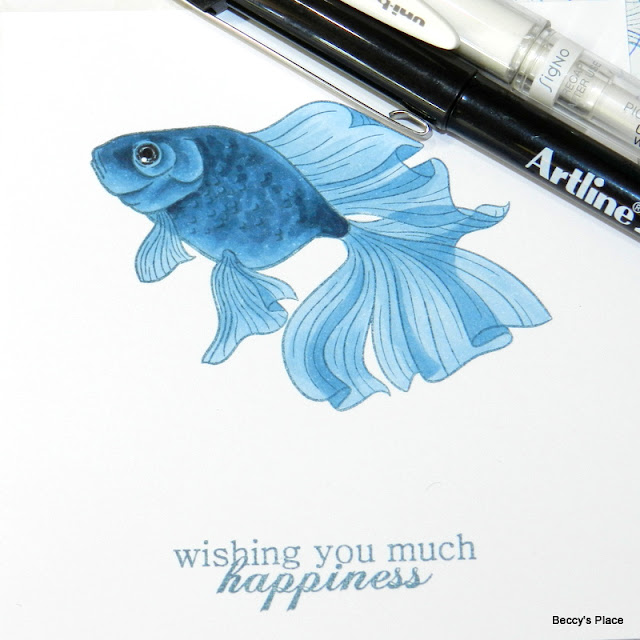 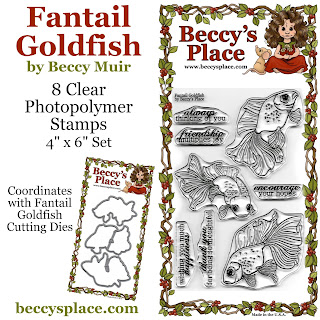 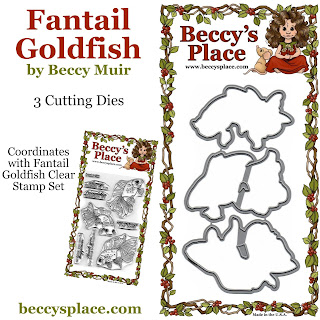 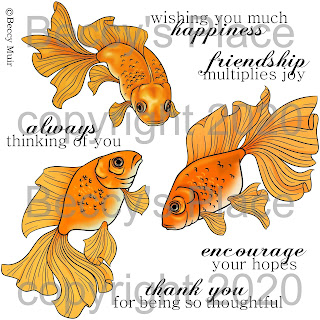