It's time to learn a new card folding technique that's both eye catching and very easy. Isn't that the combination we all love?! The card I'm going to show you today is called a tunnel card, and in it's simplest form it only requires two card blanks and a couple of clever folds.
Requirements:
2 card blanks + a scrap of matching card
Double sided tape / tape runner
Die cutting tool of choice (I used Nestabilities)
Bone folder
Embellishments
1. Print a sentiment in the centre of one of the card blanks. (You could substitute the sentiment for an image or an embellishment to get a different look). 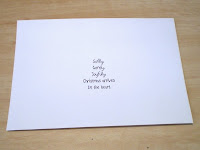 2. Fold the printed card blank in half as you would a normal card. 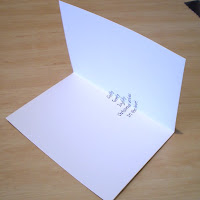 3. Find a tool or die that will fit around your sentiment but DO NOT CUT IT OUT. Set the printed card blank to one side. 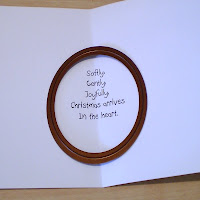 4. Cut 1/4" from the length and the width of your second card blank. I used a contrasting colour for effect. 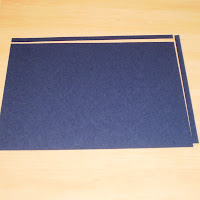 5. Fold the second piece of card in half. 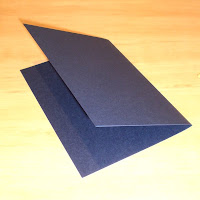 6. Now fold each half in half again in the other direction so that you have the shape created below. 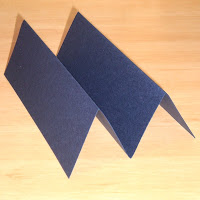 7. Using your cutting tool, cut an oval (or square, heart, rectangle, circle, etc...) from the centre of the card blank. The cut out should not reach as far as the two outer folds. 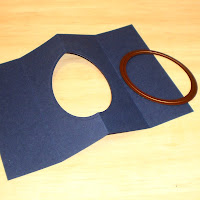 8. I cut a slightly smaller oval from a scrap of card and adhered it to the wrong side of my second card blank to give a framing effect. You could use a scalloped or decorative edge or simply skip this step altogether. 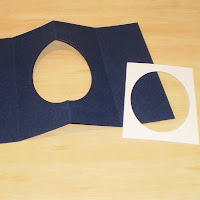 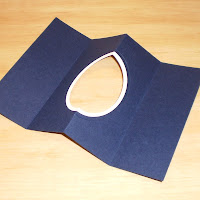 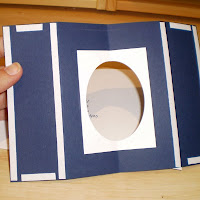 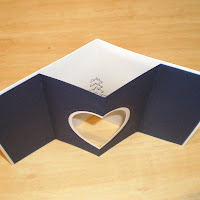 11. Embellish both the inside and the front cover of your card and you're done. Told you it was easy! 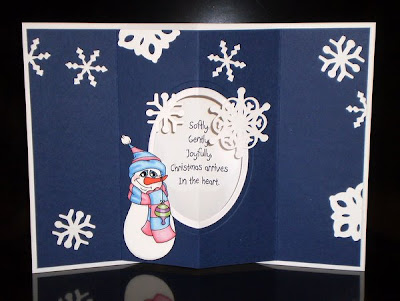 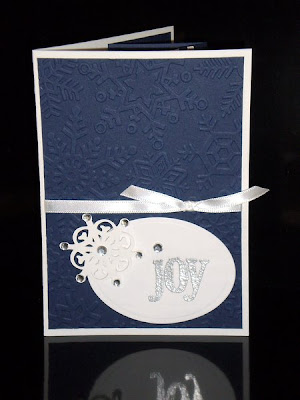 I love this!! I am soooo gonna do one of these THIS WEEK!! Thanks so much for sharing =)

thank you for showing
will be doing this

Thanks for sharing, I have never seen one of these before. Have a great day!

Love your blog and your designs. first thing I am really going to try! thank you so much for inspiring the rest of us.
Pat L

Thanks Beccy! I love learning new techniques. I will definitely try this one.

Great card Beccy and a fab tut, thank you for sharing with us all!

i have been wanting to make one of these after seeing one somewhere!!..ty ty fs..love it and your blog..loves ya

Fabulous tutorial, Beccy! Thanks for sharing it with us!

Great tutorial. Your card is really beautiful. Thank you for sharing.

I really love this effect and so simple to make,TFS

wow.. GREAT tutorial. I am soo gonna make one based on this. Thanks a lot

This is AWESOME!! Thank you so much for posting this. I'm gonna give it a go! =) Beautiful sample card too. Love the white on navy!!

Great tutorial! I'm gonna try and make one of these for my mom's b-day - it's only two days away! LOL Thanks for the tutorial!

Lovely. On some blogs I found crafters called this a Pop out card.
Nice work. First time on your blog and Love it.
Sonia
http://cardsandschoolprojects.blogspot.com

Love this Beccy, never seen a tunnel card before, thank you for the tutorial. Wonderful blog you have been meaning to have a long browse for a while now, finally happening, thank you for all the freebies and classes, you are very talented! Take careX:)

This is so awesome!! I am going to make this card today!! Thank you so much for a great tutorial!

Beautiful card, thanks for sharing

Wow. Beautiful looking card. Thanks for easy instructions, I actually understood them. I usually struggle to work out new folds