Double Tent Card
With Carousel Horses
Tent cards are created by adding a folded cardstock insert at the base of the card (although sometimes they are constructed with a single long piece of cardstock) and by joining the top, front and back, to form a triangular, or tent, shape. The extra folding allows the card to stand open at the bottom creating depth and the illusion of three-dimensions. (It's not really as confusing as it sounds... trust me!)

These instructions are for making a double tent card, which is basically a card that has the extra folding in both the top and bottom of the card allowing the entire piece to stand quite open. Feeling confident?? Let's get started... 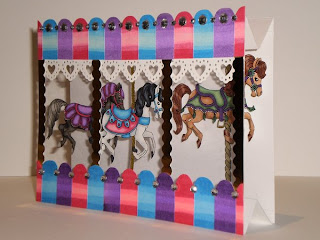 Requirements:
2 white card blanks (A5 size)
1 piece of acetate (1/2 A5 size)
3 carousel horse images - coloured as desired and cut out
Scrap piece of gold card (at least 3" x 2") - you can substitute something else
Pens for colouring
Knife and self-healing mat
Scissors
Decorative scissors
Border punch
Adhesives
Bone folder
Scoring tool
Some fairly dexterous fingers - desired but not required!
1. Cut both pieces of A5 cardstock in half to form 4 pieces that will be approximately 6" x 4 1/4". One will form the front of the card, one will form the back of the card (set them both aside), one will be cut in half for the folded inserts and the last one you will use to make the "palings" and the decorative punched border.
2. Cut one of the 6" x 4 1/4" pieces in half again to form two long, thin pieces that will be approximately 6" x 2". Score and fold each piece in half longways. Score about 1/4" from each long edge and fold again as shown in the picture below. Set aside. 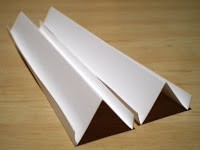 3. To form the front of the card, take one of the 6" x 4 1/4" pieces of cardstock and measure out three "windows". Leave about 3/4" between the top and bottom edges of the card and the windows, and about 1/4" between each window as shown below. Try and get them even, but don't worry too much about perfect measurements. 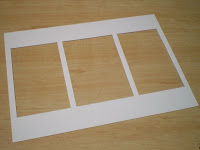 4. Use your decorative scissors to cut pretty "struts" for the windows from the gold card. You could substitute another colour if you wished or leave out this step altogether and simply colour the struts with markers. 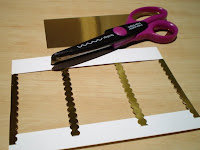 5. Use your markers and another of the 6" x 4 1/4" pieces of card to make the "palings" for the carousel. You will need to have a total of 12" x 1" of coloured card from which to make your palings (obviously this will be in two pieces). Trim your coloured cardstock with knife or scissors to form palings that are about 1/2" x 1" in size. Use your scissors to round off one end. Don't worry too much about getting the rounded end perfect, but make sure you don't cut the palings shorter than 3/4".
6. Run some double sided tape along the top and bottom of the card front and adhere your palings with rounded ends pointing up. Always start in the middle of the card and work out to either side for a more balanced result. 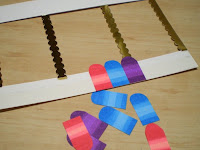 7. Use your border punch to create a decorative strip of cardstock. Adhere it from the inside so that the decorative section hangs down behind the windows as shown. Now adhere the piece of acetate to the inside of the card to form the "glass". Run some adhesive along the top and bottom as well as the struts to keep the acetate firmly in place. 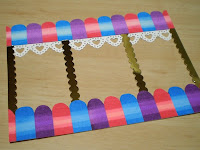 8. Adhere the middle horse to the inside, centre front of the card. Position it carefully keeping in mind that you have two other horses to fit either side. Try not to have the struts covering any part of the horse's face. Secure it with double sided tape, hard against the "glass" windows.
9. Decide which horse you want on the left hand side and adhere it to one of the folded pieces of cardstock as shown in the pictures below. I used some strong glue as well as a piece of tape to hold it in place. 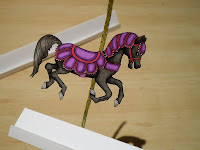 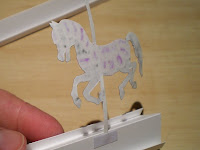 10. Adhere the bottom folded cardstock (the one with the horse adhered to it) to the front of your card as shown. I used double-sided tape for this step. Ensure that you line up the pieces carefully so they sit correctly when the entire card has been constructed. 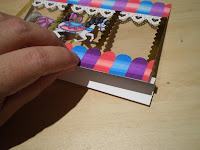 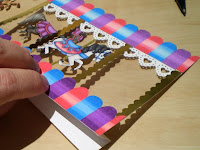 11. Now do the same for the top section, keeping everything lined up and centred. (This is where dexterous fingers have the advantage!) 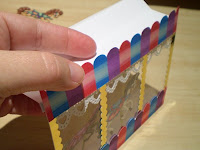 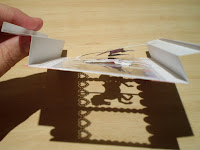 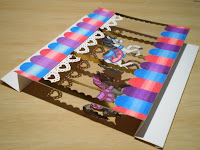 12. Secure the top of the left-hand horse to the top folded piece of cardstock in the same manner as you attached it to the bottom. (Keep in mind that if you intend to fold this card flat for postage, you will need to fold the "pole" supporting this horse.) 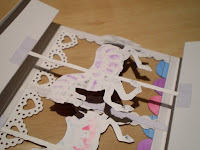 13. The third horse is adhered to the right hand side of the back section of card. Check the position of the other horses when you are placing the last one to ensure none of the faces are obscured. You might want to raise of lower the position of this horse to indicate the way a carousel's horses rise and fall as the carousel turns.

14. Attach the back of the card to the two folded sections in the same way that you attached the front... and voila! You're done. 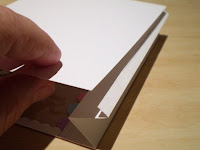